After the Top Ten Tuesday a few weeks ago in which we shared our favorite quotes from books, Selah from A Bibliophile’s Style and I were inspired to do a list of our favorite Doctor Who quotes, because there are just so many. It was SO HARD to narrow it down to only ten as I could list Doctor Who quotes for DAYSSSS. But I’ve put together a list of ten of my favorite quotes, and I haven’t put the character that said these quotes next to them because I think it’d be fun for you guys to try to guess. If you want. I’ve put the answers at the bottom in case you get stumped. 🙂

To start us off, the quote that inspired this post:

1. “You want weapons? We’re in a library! Books! The best weapons in the world! This room’s the greatest arsenal we could have – arm yourselves!”

2. “When you’re a kid, they tell you it’s all… Grow up, get a job, get married, get a house, have a kid, and that’s it. But the truth is, the world is so much stranger than that. It’s so much darker. And so much madder. And so much better.”

5. “This is one corner… of one country, in one continent, on one planet that’s a corner of a galaxy that’s a corner of a universe that is forever growing and shrinking and creating and destroying and never remaining the same for a single millisecond. And there is so much, so much to see.”

6. “What’s the point of being grown up if you can’t be childish sometimes?”

7. “There’s always something to look at if you open your eyes.” 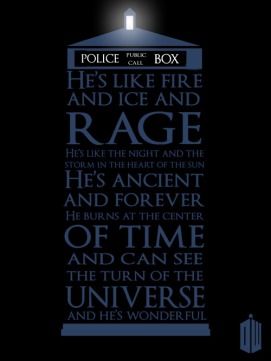 9. “A straight line may be the shortest distance between two points, but it is by no means the most interesting.”

And the one that sums up how amazing the Doctor is:

10. “He’s like fire and ice and rage. He’s like the night and the storm in the heart of the sun. He’s ancient and forever. He burns at the center of time and can see the turn of the universe. And…he’s wonderful.”