It’s almost the end of my “Twelve Days of Christmas” in which I review one story per day of My True Love Gave to Me. 😦 Sad face. So far I’ve reviewed Rainbow Rowell’s “Midnights”, “The Lady and the Fox” by Kelly Link, and Matt de la Peña’s “Angels in the Snow”, Jenny Han’s “Polaris is Where You’ll Find Me”, Stephanie Perkins’ “It’s a Yuletide Miracle, Charlie Brown”, David Levithan’s “Your Temporary Santa”, Holly Black’s “Krampuslauf”, Gayle Forman’s “What the Hell Have You Done, Sophie Roth?” and Myra McEntire’s “Beer Buckets and Baby Jesus” (in one review).

Today’s story is “Welcome to Christmas, CA” by Kiersten White.

I was completely surprised by the wonderful originality of this story. There are so many cool ways to interpret Christmas for a good story. Maria lives in Christmas, CA, a town (okay, you can’t really call it a town. It’s a census-designated place) that is always in the Christmas spirit. She can’t wait to leave. Well, until she meets Ben (short for Benedict? Benjamin? Bennett?), the new cook at the diner where Maria works for tips (her mom is the manager). Ben loves Christmas and is able to bring some Christmas cheer into a town that’s losing it.

I’m going to need Santa to bring me a Ben for Christmas, okay? He’s sweet and happy merry and can cook and yeah, that’s what I want for Christmas. Thanks, Santa. I’ll be waiting.

This story made me so happy. Not only for Ben but for the fact that it was so original. It isn’t just a story set during Christmas, but in a town named for it. The story was clever and witty and so very sweet. I thought the main character was a little bit of a brat though, whiny and rude at times, but Ben more than made up for it. The story definitely put me in the Christmas spirit – with the decorations, references, merriment, and an elf over the door with a knife in his hand.

Overall, one of the good ones.

It’s day seven of my “Twelve Days of Christmas” – reviewing one story per day from My True Love Gave to Me. So far, I’ve reviewed Rainbow Rowell’s “Midnights”, “The Lady and the Fox” by Kelly Link, and Matt de la Peña’s “Angels in the Snow”, Jenny Han’s “Polaris is Where You’ll Find Me”, Stephanie Perkins’ “It’s a Yuletide Miracle, Charlie Brown”, and David Levithan’s “Your Temporary Santa”. 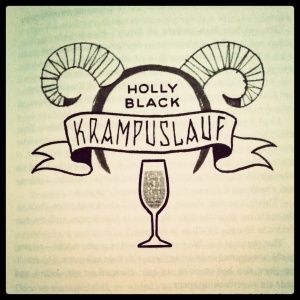 I liked this one. Quite a bit. It was weird and different and dream-like. I’ve never heard of Krampus, but apparently he basically looks like a satyr – goat legs, horns, human torso – and he punishes the children who are bad versus rewarding the children who are good. Hanna and her friends decide to go to a Krampus celebration (well, really, it’s just a hipster-ization of Krampus including hot chocolate and a charity run) to spy on the guy who screwed over Penny, one of the friends. They end up inviting the guy and his real girlfriend and their friends – as well as a cute boy who has a seriously realistic Krampus costume – to a New Year’s Eve party. Fighting, drinking, kissing, and laughing ensue.

I really, really like this one. I’ve only ever read/listened to Holly Black’s Doll Bones, but this story confirmed I seriously like Black’s clever and smart writing style. This story is really different from what you’d probably expect from a holiday story. There’s magic and mythical creatures. It doesn’t center on Christmas and it’s got Krampus – who’s kind of a more interesting version of Satan. I mean, what? I felt a little like I was dreaming while reading this and that’s actually a cool feeling to have while reading. I liked the characters, the story, the magic, the uniqueness, the writing style, everything. One of my favorites so far. Looking forward to reading more Holly Black and researching Krampus some more.

Yesterday I told you that I’ll be reviewing one story a day from My True Love Gave to Me until Christmas, sort of like my own “twelve days of Christmas.” I thought it’d also be fun to review one story a day as well. I reviewed Rainbow Rowell’s “Midnights” yesterday.

This one was weird, you guys. Probably two pages in I wrote this note: “Writing style might kill me.” I’ve never read anything by Kelly Link – I don’t think I’d actually heard of her until I saw her name in the book, so I didn’t know what to expect. Let me give you an example of the writing style:

The room is full of adult Honeywells talking about the things that Honeywells always talk about, which is to say everything, horses and houses and God and grouting, tanning salons and – of course – theater. Always theater. Honeywells like to talk. When Honeywells have no lines to speak, they improvise. All the world’s a stage. – page 24

The reason it bothered me is it’s a mix of super long sentences and really, really short ones. It was strange to read and took a while to get used to, but by the end, I didn’t even notice it anymore.

On the other hand, there were some descriptions I really liked, such as “Unnaturally natural” (page 25), which is just really fun to say, and “Snow is predicted, snow falls” (page 27), which is simple and straightforward.

The story is also strange, but in a good way. Miranda is the goddaughter of Elspeth Honeywell, and as her mother is in jail, she spends every Christmas with Elspeth and her son Daniel. The Christmas they are both 11, they see a man standing outside the window, watching. Through the years, Miranda continues to meet with the man – Fenny – but only when it snows and only on Christmas. He never ages, and she finds out that he’s stuck with “the Lady.” I’m sure you can predict what happens – which wasn’t nearly as annoying as you’d think. I enjoyed the story and was as charmed by Fenny as Miranda was.

I wasn’t expecting the fantasy aspect to the story, but I just really loved the magical bits. The scene near the end when everything comes to a head was really cool. So: somewhat annoying writing style but really cool story.

When I bought My True Love Gave to Me (edited by Stephanie Perkins and including short stories by wonderful authors like Rainbow Rowell, Holly Black, and Stephanie herself), I knew I wanted to read one of the twelve stories each day until Christmas. You know, have my own “twelve days of Christmas.” 🙂 Then I thought you guys might enjoy mini reviews of each of the stories, instead of one review of the whole book, which might exclude some of the stories. At least, I hope you’ll enjoy that. Because that’s what I’m going to do. That’s what I’m doing. Yeah… I hope you’ll stick around and read all twelve – one a day until Christmas.

The first story in My True Love Gave to Me is by Rainbow Rowell. It’s called “Midnights” and it documents several New Year’s Eves at “almost midnight” between Mags and Noel – from the beginning in 2014 when Mags is apparently hiding from Noel, back to when the met in 2011, and then through the New Year’s Eve parties for the next two years until we find ourselves back in 2014.

This story is very evidently by Rainbow Rowell. Okay, I’ve only read one book by her (Attachments, which I loved), but the writing was Rowell – hope that makes sense. She’s got wonderful descriptions that I just love, like this one:

Maybe it isn’t super beautiful or anything, but I can just picture Noel perfectly. In my opinion, that’s the mark of a great writer. The story is also funny in Rowell’s somewhat dry and not overly obvious way. An example:

Mags felt it when Noel walked in. (He came in through the back door, and a bunch of cold air came in with him.) – page 13

My only complaint with this story is that it was too short. Because of that, it felt rushed in parts and it was harder to see the growth that occurred in the characters. Mostly, I just really wanted this to be a much longer story – you know, a book. I could’ve read a lot more about these characters.

Check back tomorrow when I’ll be reviewing the second story in the book, Kelly Link’s “The Lady and the Fox.”