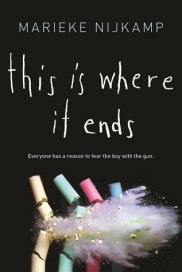 This is an important book about a super relevant subject. The subject matter is terrifying and heartbreaking and I’m sure it’ll hit close to home to a majority of the people who read it because who hasn’t seen or heard about the ridiculous amount of school/public shootings this year?

It’s absolutely disturbing. Much like the shooter in This is Where It Ends is meant to be. He is bent on revenge against a school that never cared for him and who smiles wryly as he shoots people in the head. But I wanted so much more from this book. It wasn’t until the last 30 pages or so that I actually felt anything for one of the characters. I had no connection to any of the characters. I didn’t feel like I was in Alabama or that any of these people were from there (the diversity and treatment of it is something I could go on and on about for paragraphs, but I’ll just say NO NO NO NO). I felt like I was being talked at the entire time – I wasn’t shown how these characters were feeling, the absolute terror the students in the auditorium must be feeling.

I really only felt engaged in the scenes where the shooter was present, particularly with the dialogue between him and his victims – when he stands on the stage and demands that his fellow seniors raise their hands; when he yells at his sister and says he’s always been alone; when he hunts down his victims like prey. It’s upsetting and disturbing. Well, actually maybe I only wanted it to be upsetting. But we never really understand him; we don’t get inside his head to see why he is doing this. We are told he wasn’t always this way, but all we ever see or hear is about the horrible things he’s done – he’s evil, vile, disgusting. We don’t know what made him snap, why he decided this is what he should do. The book doesn’t delve into the supreme complexity of this situation, and I just don’t think that TIWIE is a good portrayal of the psychological reasoning behind something like this. It felt very superficial.

We also get a million flashbacks and inner monologues from the four main POVs. I know this is to build backstories for these people we are meant to care about, but I really wish that we’d gotten a bit more of this before the story began versus shoving them into the chapters and disrupting the flow of the narrative. I feel like my heart should have been pounding throughout – the whole story happens over the course of just 54 minutes; I should have been on the edge of my seat.

The bottom line: For all of the really serious issues that are brought up – from the actual shooting to rape to racism, I felt nothing was actually discussed. I had barely any emotional connection to anyone, save one character. The subject matter is so important and the book had TONS of potential, but I was disappointed in the execution.