This week is all about music & books. We previously did books we’d give theme songs toso feel free to do that! Or 10 songs I wish that were books (check out my love songs I wish were booksfor an example of what I mean) — Thanks to the couple people who suggested making this one an official topic. I don’t know why I hadn’t…I think I thought my post WAS for TTT in my head when I thought back to it.

Yes. The whole album. I was going to try to pick one song on there, but I think that whole album is a story that would make a perfect book. Just listen to Run or Hollow Moon (Bad Wolf) or Headrest for My Soul or Windows. Run would be a book kind of like My Heart & Other Black Holes but more reflective on humans as a whole. I don’t know. I just think it’d make a great book.

I like a lot of sad music, you guys. But this song could be such a powerful book. Just check out the chorus:

Afraid by The Neighbourhood | Spotify Link

I think this could be two different stories. In one, a psychological thriller. He’s afraid someone else is going to be him the next day. And maybe when he wakes up, he is someone else. *shudders* But in the other, it could be a story of a character struggling with their mental health. Literally afraid they are losing themselves.

Remember when I said I like sad music? Yeah. Here’s another. I just really want to know the story behind this one and I think it could make a really wonderful book.

I want this entire video trilogy to be made into a book. If you haven’t listened to these songs or watched these videos, go do it now. You won’t be sorry.

I think this could turn into a book that comments on drug use amongst teens. But it could also turn into a historical-fiction-esque book with a Bonnie and Clyde kind of feel. Feds chasing them.

I Wanna Get Better by Bleachers | Spotify Link

The lyrics tell the whole story.

That’s a story right there. Contemporary YA – fall in love, fall out of love, angry but upbeat ending. This would kind of refreshing to not have the couple get together in the end.

What songs do you wish were books?

Note-able is my very, very irregular post in which I talk about songs, musicians, bands, concerts…in other words, any music that I find special or worthy to be discussed.

I love The Neighbourhood. I’ve loved them since fall 2012, when I won tickets to see this band I had never heard of at this small, wonderful venue in Glasgow, Scotland. There were maybe 50 people there, my knees were touching the stage, and the band walked right off the stage and came to talk to us. This is one of the best shows I’ve ever been to, and I immediately fell for The Neighbourhood – I’ve been a fan ever since. I’ve bought (or downloaded for free, in the case of #000000 & #FFFFFF) every single song they’ve released since then. I’ve seen them 3 more times since Glasgow, and now, today, I’m seeing them for the 5th time. They’re the only band I’ve seen this many times, but they put on an amazing show every single time. Plus, they’re some of the coolest musicians I’ve met.

So since I’m currently on my way to Atlanta to see the band, I thought I’d share some of their music with you guys. They recently released a new single called “R.I.P. 2 My Youth” and a video, and it’s pretty much perfect. Listen and watch below.

Some of my other favorite songs by The Neighbourhood (all linked to YouTube):

Check out The Neighbourhood’s YouTube page for more music – it’s ALL good.

I’ll see you guys on Monday, but until then…do you have a song you think is note-able? Link me up in the comments! I love discovering new music.

The lovely Cristina over at Girl in the Pages started Sunday Funday as a way to recap the bookish (and not-so-bookish) things that have happened that week.

This week I went to see The Neighbourhood with my friend Jugee Georgie in Nashville. I had a super crazy week at work because of it, but I had an amazing time. It was my fourth time seeing them play live, and my third time meeting Jesse, the lead singer. He remembered me and was super wonderful. I had a blast, and it was totally worth the 2.5 hours of sleep I got and the 12 hours of driving in 24 hours. 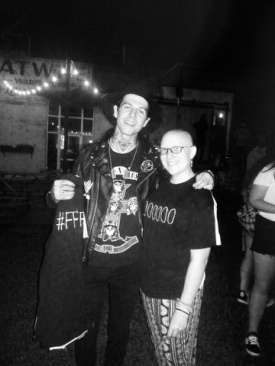 My interview with Lori Rader-Day, who wrote The Black Hour (which I LOVED), went up on WatchPlayRead! I loved the opportunity to learn more about her and her writing.

Books read: This week I read Fortunately, the Milk by Neil Gaiman; Saga [volume 2] by Brian K. Vaughan; Samuel Blink and the Forbidden Forest by Matt Haig; and several children’s books. I also started listening to an audiobook for the first time; I chose The Dead Father’s Club by Matt Haig and I am seriously loving it so far – the narrator is just perfect.

TBR: I had my first ever comic book haul this week! I’ve added all of those to my TBR obviously. I also checked out Odd and the Frost Giants by Neil Gaiman and the audiobook of A Spot of Bother by Mark Haddon from the library. I’m definitely looking forward to both of those.

I have a long (45 minutes or so) commute to each of my jobs so I’ve really enjoyed listening to an audiobook on the way. It makes the drive seem a lot shorter and I get to read/listen to even more books now! I never thought I’d enjoy audiobooks, but I definitely do.

I just found out that Tom Felton is in this new show on TNT called Murder in the First; I’m not sure how I missed this, but all of the first six episodes are on Comcast’s On Demand, so I know what I’ll be catching up on this week.

What happened to you guys this week? Did you read any good books? Tell me about your week in the comments!