Saci Lloyd’s It’s the End of the World As We Know It is a wild ride through a wormhole and into a parallel world full of internet speak, zombies, uncontrollable algae, and unique and weird characters. You’re in for some craziness. 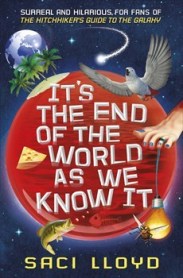 NOTE: I was provided with an e-ARC of this book via Netgalley in exchange for an honest review. Thank you to Hodder Children’s Books for letting me read this.

Let me start by giving you a short list of the things included in this book:

– A power-hungry Lolcat – the ruler of Deva (the parallel Earth) is a freaking cat that speaks like those Lolcats, u kno, lik dis. Hard 2 undrstand sumtims.
– Little infobots that surf on energy waves
– A sex-crazed poisonous fungus
– Zombies
– An angry, badass girl who might be a little bit robot

Alright, if that doesn’t sound awesome to you, I don’t know what else I could possibly say to convince you, but I’ll try. This book is trippy, you guys. I barely knew what I was reading most of the time, but that was pretty much the best part. It was surreal, weird, absolutely cuckoo, and so much fun. It’s got weird, unique characters that had me giggling like an idiot. They each speak a certain, specific-to-them way, which was cool yet irritating (internet speak as dialogue for a few of the characters. The whole time!). I think people who enjoy weird, strange, and wonderful books will have a lot of fun with It’s the End of the World As We Know It. On the other hand, I definitely don’t think this book is for everyone. It’s super bizarre and really odd, so you’ve got to into this one with an open mind or you’ll probably be weirded out by the book. Personally, I love silly, peculiar books, so this was super enjoyable!

However, I do want to say that occasionally It’s the End of the World As We Know It felt like it was trying a little too hard to be quirky, to be like Douglas Adams. It bothers me a little when publishers compare books to something like Hitchhiker’s Guide because it sets the bar SO HIGH. Most of the time I was loving how crazy everything was, but it felt a little over the top sometimes, which, I suppose, is par for the course.

I also want to share the riddle this book starts off with:

Q: How many mad scientists does it take to change a light bulb?
A: Two. One to hold the bulb, the other one to turn the universe.

The bottom line: It’s the End of the World As We Know It was a fun, weird, and crazy ride on a rift through time and space. It was full of quirky characters and interesting sci-fi themes, though sometimes it felt like it was trying too hard to be weird. I still had so much fun reading it, as it was wildly imaginative and surreal. 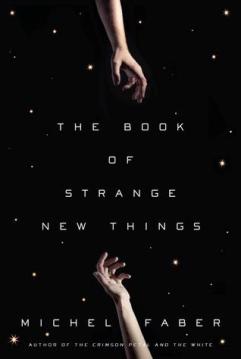 Peter is a pastor, happily married to his wife Bea, when he is called to a mission by a mysterious corporation known as USIC. He is sent galaxies away to a completely new environment, where is to teach the strange natives from his “book of strange new things.” While he’s gone, Bea’s faith begins to falter as the world as Peter knew it begins to crumble (typhoons and earthquakes and failing governments). The distance between Peter and Bea has never felt so far. He struggles to fulfill the needs of his congregation and also the needs of his wife.

It’d been a long time since I’d read an “adult” novel and an even longer time since I’d read something I’d classify as literary fiction, so it took me a little bit to get into The Book of Strange New Things. To really, really get into it, I’d estimate it took me about 100 pages, but I am so glad I kept going. This novel is incredible, you guys. I was glued to the book for the last 250 pages, at least, flipping through the pages at lightning speed. I was fascinated by Oasis, what this new planet was dubbed, by its natives, by USIC’s secrets, by Peter’s relationship to both Bea and the Oasans, and by Peter’s seemingly unnoticed (by him but not by others) deterioration in body and sanity.

It’s safe to say that The Book of Strange New Things is not at all what I was expecting. Honestly, I’m not sure what I was expecting. The only book I’d read by Michel Faber previously was Under the Skin, and to me, this was vastly different. It’s also completely unlike pretty much any sci-fi book I’ve ever read. Instead of focusing on the science aspects (the new world, the technology, the natives, etc.) it focuses on the relationships between Peter, our main character, and the people around him. The book is emotionally complex, leaving both the characters and the reader feeling almost raw. It’s bleak and sad and beautiful and hopeful.

I like this book for several of the same reasons that I love Matt Haig’s The Humans (though the books are dissimilar in many ways too). Much like in The Humans, you appreciate what it means to be human even more by comparing yourself to the “aliens” – their lack of emotion (though don’t be fooled by this), their simplicity, their lack of differences (again, don’t be fooled).

Faber handles the topic of religion deftly. The tests of faith feel appropriate and true. Faber neither endorses nor condemns religion throughout the book, instead the development of the themes unfold naturally, making the story feel genuine and honest. The characters’ beliefs are plausible even in a fantastic setting.

I don’t just mean this with the humans. The natives of Oasis feel realistic too. They are appropriately alien, different physically, emotionally, and mentally (especially physically – weirdest descriptions ever). Despite this, they are still easily relatable with their struggle to communicate effectively, learn, and grow. Plus, the creative way that their language is depicted is seriously cool.

My only complaint is that it ended. Yes, I wished that a 500 page novel would have been longer. SPOILER: it’s open-ended, which leaves a lot of things left unanswered. I both love and despise this. I want to know what happened!

The bottom line: If it wasn’t apparently obvious, I loved this book. It was captivating and profound and beautiful. I’ll be buying my own copy (I checked it out from the library) – the hardback has gold gilded pages and it’s gorgeous.