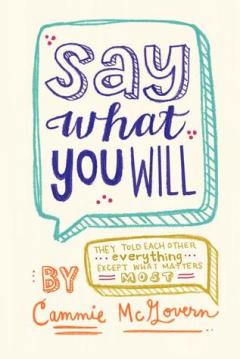 Title: Say What You Will

How did I get this book: Borrowed from the library

Let’s start with a brief synopsis from Goodreads:

Born with cerebral palsy, Amy can’t walk without a walker, talk without a voice box, or even fully control her facial expressions. Plagued by obsessive-compulsive disorder, Matthew is consumed with repeated thoughts, neurotic rituals, and crippling fear. Both in desperate need of someone to help them reach out to the world, Amy and Matthew are more alike than either ever realized.

When Amy decides to hire student aides to help her in her senior year at Coral Hills High School, these two teens are thrust into each other’s lives. As they begin to spend time with each other, what started as a blossoming friendship eventually grows into something neither expected.

John Green’s The Fault in Our Stars meets Rainbow Rowell’s Eleanor & Park in this beautifully written, incredibly honest, and emotionally poignant novel. Cammie McGovern’s insightful young adult debut is a heartfelt and heartbreaking story about how we can all feel lost until we find someone who loves us because of our faults, not in spite of them.

I believe there are choices each of us makes every single day. We can dwell on our limitations or we can push ourselves past them. I have learned not to judge people by their limitations, but by the way they push past them.

I thought this book had a beautiful and extremely positive message. In that effect, I think it completely earns its comparisons to John Green’s The Fault in Our Stars. The characters in Say What You Will, Amy and Matthew, are very authentic, in my opinion. Of course, I don’t know anyone with cerebral palsy, but I thought Amy, as well as how other characters acted around her, felt real and legit (and also sad).

I really liked the diversity in this book. I read to be exposed to things I haven’t had any experiences with. I love to learn about new things and there was a lot of learning in Say What You Will. I know some about OCD, but I was able to broaden my knowledge while reading about Matthew and his struggle with his disorder.

On the other hand, it was sometimes hard to feel what these characters felt. Yes, I learned more about what it is like to deal with these two very different disabilities, but I didn’t actually feel their reactions, etc. I do want to say that the writing is beautiful and feels really authentic, but it was just hard for me to actually empathize with the characters. Closer to the end of the novel, I was able to feel some of their emotions, but it took way too long for this in my opinion.

Something else I liked about the book were the formats McGovern used to deliver the story. We get texts, letters, IM messages, and my favorite: unsent draft emails. I liked all the different formats, but the unsent emails were my favorite because they provided insight into the characters feelings that we (okay, I) were unable to see earlier in the novel. These draft emails were definitely a better choice than diary entries.

Though I thought it was super shocking, the unexpected plot twist made these characters deal with their disabilities in a way they had never had to do previously, and I really appreciated McGovern’s use of this twist for that reason.

I do wish we could’ve gotten to know the other characters better. The focus was on Amy and Matthew too much and everyone else was pushed aside. The only other character we sort of got to know was Amy’s mother but only really through our main characters’ eyes.

In my first Quote Quoted post this week, I talked about one of my favorite quotes from this book. Here it is again:

Freakishness could happen to anyone at any time.

The message in this book was awesome: You don’t always know what is crippling someone. Just because they look fine on the outside, it doesn’t mean that they are okay. You should never assume and you shouldn’t be afraid of the unknown. I loved that. “It was all about acceptance, he thought. About realizing no one is perfect and no one can expect to change someone else.” Everyone has flaws and you shouldn’t judge someone on them.

As you can probably tell, Say What You Will was kind of a roller coaster for me in terms of what I liked and what I didn’t like, but I would definitely recommend it. Especially to people looking for something different and unique or a book dealing with disabilities but full of acceptance.

Reading Next: The Black Hour by Lori Rader-Day

Hey guys! So I’ve been toying with the idea of every few days or so posting a quote from the book I’m currently reading (or a favorite quote from a book I’ve already read). I will post the quote and then explain why I like it and we can discuss in the comments. What do you guys think of this idea (and the title for the post?). GIVE ME ALL THE FEEDBACK! 🙂 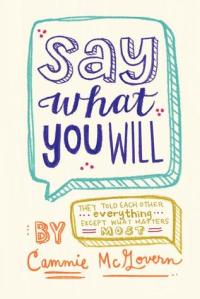 I’m currently reading Cammie McGovern’s Say What You Will, which I’m enjoying. When I read this quote, I really liked it right away. Here it is:

Freakishness could happen to anyone at any time. -Page 13

If you don’t know, this book is about a girl, Amy, who has Cerebral Palsy, and a boy, Matthew, who has OCD. Yes, each of them have their own problems, but I think this book is really trying to tell you that your problems don’t always have to be so obvious (like Amy’s). Anyone could have problems or be a little strange and you might not know it. Like Matthew (well, maybe not quite as intense), you could be afraid of a lot of things but no one will know that by looking at you. I’ve mentioned it before on the blog, but I’m going through some stuff (wow, that is a generalization, but again, not the place to go into that “stuff”), and this quote sort of just struck home…I guess? I thought it was so true, and it reminded me a little of a quote from the movie Psycho: “We all go a little mad sometimes.”

Have you read this book? Did you like this quote? What do you think about it?

So today’s Bout of Books challenge hosted by River City Reading is to create a list of the books you are looking forward to.

Here’s my Bout of Books update post so you can keep track of how I’m doing!

Here are three that are already published: 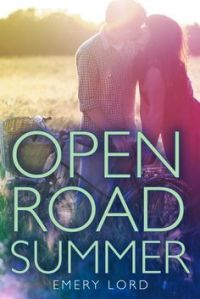 2. The Museum of Intangible Things by Wendy Wunder 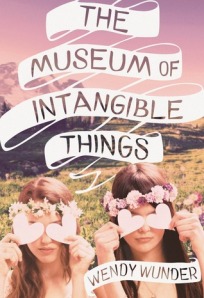 3. The Chance You Won’t Return by Annie Cardi 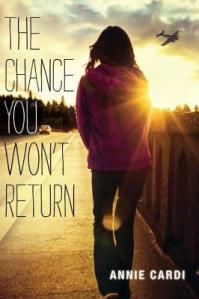 And two books to be published this summer:

4. Isla and the Happily Ever After by Stephanie Perkins 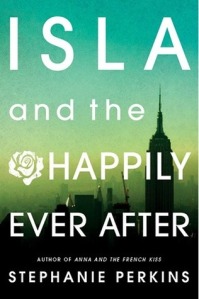 5. Say What You Will by Cammie McGovern

If you’re participating in Bout of Books, link me to your update post so I can keep up with how you’re doing? 🙂