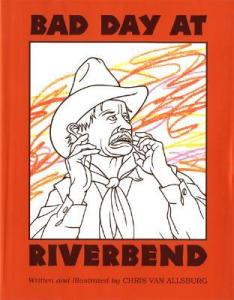 I really enjoyed the idea behind this book, but overall, I wasn’t a huge fan. Basically, the people of Riverbend are surprised when a strange substance begins to cover their horses, then the stagecoach and town. Sherriff Ned Hardy decides to investigate. I’m sure other readers, and kids, will be surprised when they find out the reason behind the substance. I do want to say that I thought the idea was really quite clever, and it makes sense why the illustrations are so simple once you reach the end. However, the execution just wasn’t my favorite.

I enjoyed this one quite a bit more than Bad Day at Riverbend. The illustrations were really, really good. Everything has a brown tint to it which I thought conveyed the time period in which the book is set – 1940s America – really well. I thought the story was really cute. Probuditi! is about a boy who goes to a magic show and then decides to try to hypnotize his sister. I don’t want to give it away, but I absolutely adored the ending. I won’t say I was super surprised with the ending, but I did love it! I think anyone that has a sibling will be able to relate to the relationship between Trudy and Calvin.

There were things I liked and things I didn’t like about this one – okay, only one thing I didn’t like. Two Bad Ants is about two ants who leave their group after a journey into someone’s house to steal some crystals for their queen (sugar granules). They attempt to make a home with the crystals, but when the person who lives there starts to make his coffee, things go awry! It is an adorable and enchanting story. The ants are thrown into a “boiling brown lake” – which is actually a cup of coffee. It was just very cute. After going through a lot of horrible things, the ants are ready to go home.

The whole theme of the story is being obedient and knowing the comforts and safety of home. I do appreciate that but it also seems as if it’s telling kids that they should never try something new. You will never learn if you don’t try things and fail. It seems a lot of things nowadays are telling kids not to question how they are raised and what they are used to. I do like that it is telling kids to appreciate what they have though.

Witch’s brooms don’t last forever. They get old and eventually can lose their ability to fly. This happens one day and a broom is left at widow Minna Shaw’s home. Minna uses it around her house, and then one day she finds it sweeping by itself. She eventually trains it to do many other tasks, but her neighbors are very superstitious and they are afraid of the broom. They want her to burn it.

I loved this story. It was beautiful with wonderful illustrations. The shadowing in the illustrations along with the story make you feel as on edge as the widow feels. I loved how the story told a tale about how people will often destroy what they don’t understand. It looks at bullying and superstition as well. If read to kids, it might make them reevaluate how they treat their peers (hopefully). A very good story.

Zathura is a continuation of Chris Van Allburg’s Jumanji (which I’m sad to say I haven’t read). Instead of a board game set in the jungle, this one is set in space, and it includes robots, brother-swallowing black holes, and space travel. This book was so much fun! I would definitely say that it is for older kids though.

The illustrations in Zathura were crazy good – ridiculously detailed. The story itself is very imaginative. I think this book could be a gateway book into sci-fi for younger kids; it is the epitome of wonderful, creative science fiction. Kids who have siblings will also be able to relate to the sibling rivalry between the two brothers, and it could teach them to appreciate their sibling – you would miss them if they disappeared.

So there you go. I’ve read five Chris Van Allsburg books so far. There were ones I loved (Zathura; Two Bad Ants) and ones I didn’t (Bad Day at Riverbend). I’m glad I’ve been able to see the range in Van Allsburg’s work. I need to read Jumanji.

Have you read any Chris Van Allsburg books? Which are your (or your kid’s) favorites?