I have something really excited to talk about today, especially if you live in or around Mississippi. We are getting a BOOK FESTIVAL!! I love the way the festival describes itself: “A literary lawn party celebrating authors & their contributions to the culture of literacy, ideas, & imagination.” It sounds like a wonderful day. On August 22, 2015 at the Mississippi State Capitol, the inaugural Mississippi Book Festival will feature so many amazing authors, and, if you are interested, you can see the full day’s schedule on the festival’s website. One of the best parts? IT’S FREE! I’m excited for the entire day, but I wanted to feature two of the panels I’m most looking forward to: The Children’s Illustrated Book panel and the Books for Young Readers panel. I’m sure you know why I’m excited for these two the most. 🙂 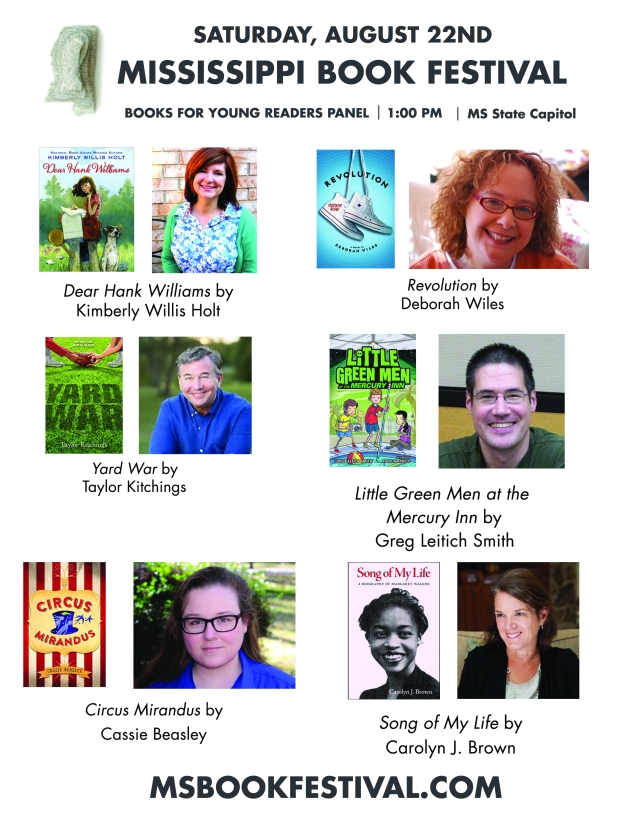 You can learn more about the Books for Young Readers in this article from the Clarion Ledger including some fun facts about each author! Also, as far as I know, most of the authors will be available for signings right after their panel!

I’m really excited about what this festival means for my state, and I can’t wait to be surrounded by bookish people for an entire day. If you are located in or around Mississippi, I really hope you’ll consider coming to the festival. And if you do come, make sure you say hi if you see me – just look for the girl with no hair 😉

Reasons are hard. Trying to put into words the reasons why I love you is hard, but I’ll try.

Reason #1: You are weird. Like, SO weird. But you’re that special kind of weird that I absolutely love. You’re unique and strange and beautiful and funny and emotional and just brilliantly weird in the best possible way.

Reason #2: David Arnold’s writing is incredible. Like, mind-blowingly incredible. I cannot believe you are his debut novel. How is that even possible? I cannot wait to see what comes from him next if YOU are his FIRST book. Parts of you felt like poetry. I was torn between racing through you and taking my time to savor David’s writing. I’ll definitely be rereading you in the future.

Reason #3: Mim. MIM! Oh my goodness. She is just an incredible character. David NAILED her voice. She’s this perfect blend of hard and vulnerable. Sassy, independent, scared, sad, smart. She is such a teenager. I can’t believe how well David wrote her. I love her so much that she’s made it onto my short list of favorite characters ever.

Reason #4: You are the definition of perfect story telling. Your characters’ voices are spot on, your writing is beautiful, but that’s not the best part. You are just a good story. Entertaining, engrossing, fascinating, exciting. I just want to list all the best adjectives to describe you.

Reason #5: This is what my book looked like when I finished. Green flags are from RachelMarie at Nerd Herd Reads; pink are from me. This is what a book looks like when you LOVED it wholeheartedly. 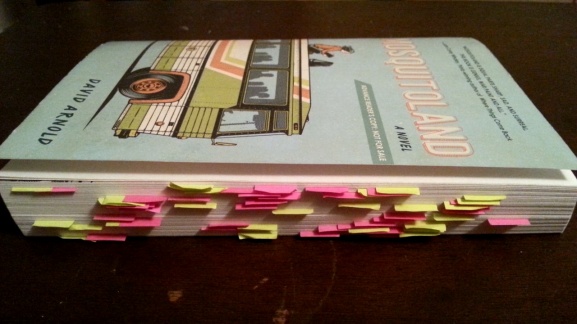 The bottom line: Reasons are hard. Mississippi is hard. But you? You’re beautiful and quirky and plain ol’ strange, and I love you.

Seize the Tuesday is a book blogger meme created by Adi Alsaid and the Let’s Get Lost Buddies Street Team, to share stories about how we’ve seized the Tuesday, with a special focus on the particular book we’re reading. We’ll share our posts online with the hashtag: #LetsAllGetLost. The idea is not just to help spread the word on LGL, but also to remind people to live fully, even/especially if that means spending a part of your day reading.

Today was a pretty great day – other than the ice on the roads this morning, that is. Why was it so great? I met another Mississippi book blogger today! We met up at our local library and then headed to Cups, a local coffee shop, for coffee and a chat. We ended up staying for TWO hours!

Her name is Lauren and she blogs over at Between the Pages. She is seriously cool, you guys. We connected in a lot of different ways and had many things in common. It was so much fun getting to know Lauren, and I’m looking forward to even more fun in the future. We’re hoping to plan a MS book blogger meet up soon! (So if you live in MS and just haven’t told me, LET ME KNOW!)

I don’t want to go on and on about it and make it weird (even though she totally told me I’m weird – haha!), but I’m so excited to be finding several other MS book bloggers, especially one that lives so close to me! It’s so great to be able to meet someone who understands when you get excited about books and who appreciates that in you. I’m looking forward to hanging out with Lauren again and to meeting even more book bloggers in person!

And of course, we wouldn’t have even met if it wasn’t for the super awesome Kelly at Live, Love, Read who introduced us through a tweet! 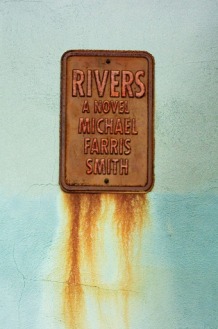 How did I get this book: Bought

Before I start, I just want to say that I know the author of this book. He was actually one of my professors at my undergraduate university, Mississippi University for Women. I will also say that I read his previously published novella, The Hands of Strangers, and I was not a fan (I’m sorry, Dr. Smith! Don’t hate me!). I wanted to say this so that if you were aware I knew the author, you did not think that my review had been swayed in any way.

So let’s start with a brief synopsis:

In a frightening, realistic, and apocalyptic future, the Gulf Coast has been battered and destroyed by a series of unrelenting hurricanes. Given up on the future of the region, the US Government has drawn “The Line”, a geographical boundary 90 miles inland that cuts off the coast from the rest of the country. Residents were warned that once the line was drawn, all laws, protection, and any rights of the residents in the region would be lost. Staying would be done at your own risk.

Cohen stayed. Somehow he is able to make a sort of life for himself, along with his dog and horse, in the home where he and his now-dead wife lived. While returning after a trip for supplies, he is carjacked and his Jeep and supplies are stolen by two teenagers, one boy and one girl. When he returns home, he sees that the same fate has befallen his house, obviously by the two who’d tried to kill him earlier. They’ve invaded the part of his house he’d blocked off: the room he’d shared with his wife and the room they’d been using to store the clothes and toys for their unborn child. He feels extremely violated and sets off to find the teenagers and get back what is his.

He finds them, Mariposa and Evan, but is shocked to find that they are being kept by an evil man who believes he is doing them, and the other women he’s locked up there, a favor by providing them shelter and food. Aggie, the man who has declared himself their savior, keeps them in trailers locked from the outside, and Evan, along with his younger brother Briscoe, are the only other males there. You can probably assume what Aggie wants with them (hint: there are two pregnant women).

Now that Cohen is there though, everything will change. A monster storm is coming and it’s the worst one yet.

Holy shit. Excuse my language, but holy shit. Be prepared to set the next few hours aside once you start reading Rivers, because it’ll suck you in with the first page and it won’t want to let you out until you’re done. Much like the storms that have ravaged the Gulf in the book, Rivers will be relentless in its hold on you.

Smith’s writing (it was really hard to not put a Dr. in front of that. Old habits and all that) is just beautiful. The prose is winding and bleak and haunting. The words wrap you up in them and force you to feel the desolation, loss, hunger, and pain that everyone in the book feels. Yes, there is a lot of “and this and that and that happened”, which sounds like it would be quite annoying, but it isn’t. His prose has a rhythm and a cadence to the sentences that make it practically impossible not to keep reading. There’s a lot of really lovely yet haunting descriptions, and you really feel and sympathize with what the characters are going through. One of my favorite sentences:

For two hours they had been moving back toward the coast, the hurricane forceful and gathering strength and the endless black night and the pounding of the rain and the wind and the twisting and turning across the beaten land and all he could think about was how alone he felt and it hurt like a broken bone. –Rivers, page 300

There were several lines that I reread a few times because I just loved the way they were phrased and how they almost felt like music. I will say, however, that a couple of times, the long sentences and multiple descriptions were a little much. It made it hard to read at my natural pace. The book is also, as I’m sure you can guess, rather depressing and it felt heavy in my mind.

On the other hand, because of this, the reader can feel the characters’ discomfort and their pain. Through Smith’s words, you feel waterlogged and filthy and all that they experience. The prose is just as brutal to the reader as Mother Nature has been to these characters. All of the characters are just so absolutely human, which I think is one of the reasons it was so hard to read. I don’t mean that I didn’t like it; I mean that you can relate so well to the emotions of each of these characters that it was difficult to see. I hope that makes sense.

The novel is so haunting, at least to me, because it feels like something that could actually happen. In the aftermath of Hurricane Katrina and Hurricane Sandy (though that wasn’t in the South), it is easy to see a future in which the storms just don’t stop. Rivers creates a realistic and terrifying future for the Gulf Coast.

I think you probably get the picture, but just in case: I LOVED Rivers. The future it has created is frightening, extremely well-written, and haunting. You will find it difficult to put this book down until you turn the last page. But even then, I doubt this one will leave you.

Rating: 9 – Practically Perfect (I would have given it a 10 but for those parts when it was just so heavy)

Reading next: The Strange and Beautiful Sorrows of Ava Lavender by Leslye Walton