Volume 2: Miles Behind Us

On Tuesday, I reviewed The Walking Dead, Volume 1: Days Gone Bye, which I definitely enjoyed! Today, I’m reviewing Volume 2 “Miles Behind Us”, which is when I became truly and completely hooked on The Walking Dead comics. I’m kind of obsessed. 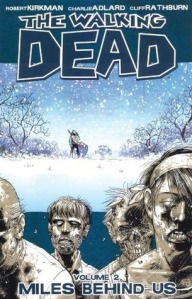 This volume follows our band of survivors on their tragic journey in search of shelter. Characters live and die as they brave a treacherous landscape littered with packs of the walking dead.

OH MY GOODNESS. This is when I realized I was obsessed with this series. I love that it’s technically a zombie story, but that’s not really the focus in these comics. It’s on the humans and their lives and struggles: their search for food and shelter and a way to start a life for themselves again.

[spoilers] In this volume, Lori figures out that she’s pregnant, and she struggles to come to terms with this and decide whether or not to keep it in the face of their search for food and shelter. How can she bring someone into their world when they already don’t have enough food for themselves?

The group runs into Tyreese, his daughter, Julie, and her boyfriend, Chris. I liked Tyreese right away. He’s a total badass. They begin to travel together, and they come across Wiltshire Estates (I think this is another one of those differences between the show and the books; I was told that Wiltshire happens at the same time as an event that happens later in the books. I’ll find out when I watch). They think they are safe, but are soon overcome by zombies. Donna is killed (YES! I know that’s horrible, but I did not like her AT ALL). 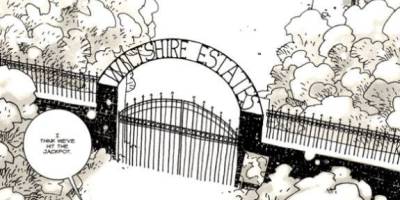 When they go hunting, Carl is accidentally shot by Otis, a farmhand for Hershel, who allows them to stay at the farm while Carl heals. I was so happy when Glenn found love with Maggie at Hershel’s place. I like Glenn. There’s a crazy scene in which a BUNCH of zombies are let out of the barn where Hershel’s been locking them up instead of killing them. Again, amazing artwork. Hershel was a complete idiot for keeping all those zombies locked up though. I know he did it because [spoiler] his son was one of the zombies, but seriously? Stupid move. 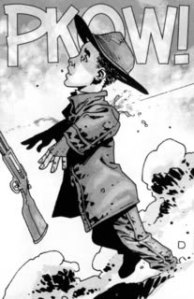 Unfortunately, the group is forced to leave Hershel’s farm and at the end of the volume, they stumble across the prison which they hope will become their home.

So much craziness and so much awesomeness in this volume. I was definitely hooked by this volume. HIGHLY recommended.

Make sure you check out my review of Volume 3: Safety Behind Bars on Saturday!