Just in case you missed my post yesterday all about what S.F.D. is, you can check it out here. Basically, we’re a team of debut author supporters started by Talina from Sassy & Dangerous, who’ll be going on a series of missions to help promote some seriously amazing authors. Today I’m super pumped to be going on a mission for Sassy’s Fangirl Debuts – my mission, which I’ve chosen to accept, is an open letter to a debut author, and I have been assigned Janet B. Taylor, author of one of my most anticipated 2016 releases.

I know you already know how freaking excited I am for your book. I’ve already got a review of it on Goodreads (all in caps) and I’ve done a Waiting on Wednesday post about it and I’ve told you on Twitter a few times, but, if it’s cool with you, I’m going to talk about it a little more.

I don’t know if you know, but I lived in Scotland for over a year. I’m completely in love with that country, so as soon as I saw the setting of your book, I was super intrigued. BUT then you added in freaking TIME TRAVEL, and, like I said on Goodreads, I realized there couldn’t possibly be a more perfect book for me.

Let’s just see. Some things I know about you and your book:

I could probably keep going, but I’ll stop there. Basically, I just wanted you to know that I am REALLY excited to read Into the Dim. I honestly don’t know if there could be a more perfect book for me. Scotland and time travel mixed together? Could there be anything that appeals to me more? I really don’t think so. Like I said in my WoW post, could I time-jump to March 2016, please and thank you?

Sincerely,
Stefani
Into the Dim fangirl

What to know more about Janet B. Taylor’s debut Into the Dim? Of course you do. 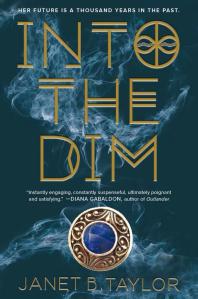 Add the book to your Goodreads shelf!

When fragile, sixteen-year-old Hope Walton loses her mom to an earthquake overseas, her secluded world crumbles. Agreeing to spend the summer in Scotland, Hope discovers that her mother was more than a brilliant academic, but also a member of a secret society of time travelers. Trapped in the twelfth century in the age of Eleanor of Aquitaine, Hope has seventy-two hours to rescue her mother and get back to their own time. Along the way, her path collides with that of a mysterious boy who could be vital to her mission . . . or the key to Hope’s undoing. Addictive, romantic, and rich with historical detail, Into the Dim is an Outlander for teens. 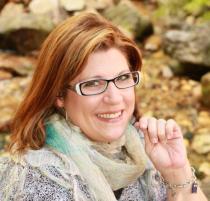 Janet Taylor lives in such a small town in Arkansas that if you happen to sneeze when you pass by, you’ll totally miss it. (Cause, you know, you can’t sneeze with your eyes open. For real–try it–it’s impossible)

Her debut novel, INTO THE DIM (coming 3/1/2016 from Houghton Mifflin Harcourt) is about a 16 year old girl who travels through time. Totally on purpose and stuff.

She’s a reader/fan first and a writer second. She lives with her fantastic husband, two hilarious sons, and Dorda the diabetic dog who won’t win any beauty contests, but has a “nice personality”.

Check out the full S.F.D. team and head to their blogs to see who they wrote a letter to! 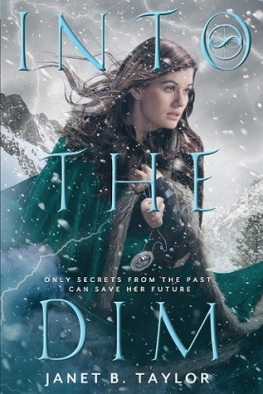 “Seventy-two hours, then we have to be back at the clearing. Sunrise on the third day.”

Being “the home-schooled girl” in a small town, Hope Walton’s crippling phobias and photographic memory don’t endear her to her dad’s perfectly blond, very Southern family. When her mother is killed in a natural disaster thousands of miles from home, Hope’s secluded world implodes. After being shipped off to an aunt she’s never met, Hope learns there’s more to her mother’s “death” than she ever dreamed. At her aunt’s manor, high in the Scottish Highlands, Hope begins to unravel the shocking truth about her family. Her mom isn’t just a brilliant academic. She’s a member of a secret society of time travelers, and is currently trapped in the twelfth century in the age of King Henry II and Eleanor of Aquitaine. To stage a rescue, the sheltered teen must join the Indiana Jones-wannabe team of time-jumpers, before her mother is lost for good. In a brutal, medieval world, Hope will discover more family secrets, and a mysterious boy who could be vital to setting her mother free…or the very key to Hope’s undoing.

Addictive and rich with historical detail, INTO THE DIM (Coming Spring 2016 from Houghton Mifflin Harcourt) is an unlikely heroine’s story of adventure, sacrifice, and first love, in a high stakes race against time itself.

Why I’m excited: I’ll start by saying what I said on Goodreads: SCOTLAND AND TIME TRAVEL?? Could there BE a more perfect book for me?

Like, seriously. You guys know how much I love Scotland and any excuse to be that much closer to that country, and I’m all in. But then you add in freaking time travel. AND a medieval world and mysterious boys and mystery and secrets and adventure and history about Scotland and that gorgeous cover, and you pretty much have the definition of the perfect book for Stefani. I NEED it right now! Can’t I time-jump into March 2016?? I know it’s like a million years until release date but I just had to share this one with all of you so you can get excited with me!!