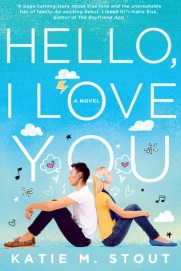 Hello, I Love You was really cute. Grace is running away from her family, and she decides to head to the complete opposite side of the planet to a school in Korea, where she meets a Korean musician who is brooding and…even rude at times. Grace has to navigate a country and culture completely different from her own as well as potential love.

When I first finished this book I was kind of…angry? Grace is not a nice person. She was ignorant, patronizing, judgmental, and just flat out rude to a lot of the people around her because they were different than her. Now that I’ve had time to think about it though, I realize that a lot of that was because of how she was raised – her family shaped her and influenced her thoughts on other cultures. While I do think she began to break out of that by the end of the novel, I don’t think it was quite as much as I wanted her to. But it was a start.

The romance was cute at times. I got a little annoyed by Jason (the love interest) as he continued to flip flop about his feelings and I wanted to reach in and shake him. Well, honestly, both Grace and Jason were hot and cold for each other throughout the novel. There were several times when I questioned WHY they even liked each other. However, this did kind of remind me of KDramas a LOT, which I know Katie is a big fan of, so I guess it makes sense.

I wouldn’t recommend this book to you if you think this a book about KPop or Korean culture because those themes are almost non-existent. Differences in American and Korean culture/customs/food/etc. were mentioned occasionally but not explored in depth like I was hoping. I was pretty disappointed with that. However, if you’re looking for a book that really resembles a KDrama (emphasis on the drama bit), Hello, I Love You is for YOU! The end of the book will give you all the feels.

Rating: 5.5 – take it or leave it (some people could really dig this one)