A lot of you have said that you really like when I share stuff from my job at the library – about programs or displays or whatever, so I thought I’d share this really fun display I did that I’m really proud of.

Greenwillow Books (HarperCollins) is running a contest centered around Kevin Henkes’ new book Waiting, and the grand prize is a freaking visit from Kevin Henkes!! So, of course, I wanted to try and win. Librarians (and booksellers) could request a promotional kit, and then they were asked to create a display that creatively and effectively promoted Waiting. This is what my display is all about: All of the characters in Kevin Henkes’ new book are waiting on something, so I wanted to see what our patrons (kids to adults) were waiting on. I asked everyone to write what they were waiting for on pieces of paper, and we had a multitude of answers – from Halloween to payday, grades to coffee on the front porch, a new baby brother to a big brother coming home from college, a visit from a fairy tale princess to an appearance by Kevin Henkes’ at the Pearl Public Library. All of the Henkes characters in the display, which come from many of his books, were hand drawn and colored by me, and I placed them around the display as if they were looking up at Waiting. My favorite is Owen with his fuzzy yellow blanket. It was SO MUCH FUN drawing all of these characters and seeing what all our patrons were waiting on. Other favorite answers: more teeth, 5 o’clock, my birthday, college, Thanksgiving, Christmas. Some of my answers: my next road trip, new books, 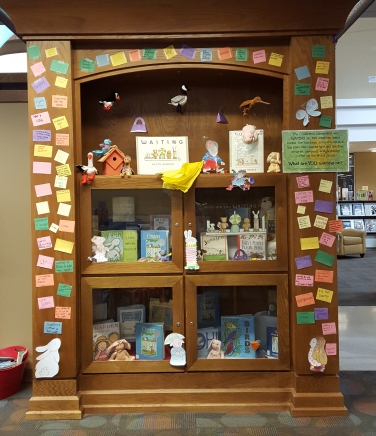 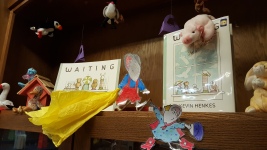 Neil Gaiman’s Stardust meets John Green’s The Fault in Our Stars in this fantasy about a girl caught between two worlds…two races…and two destinies.

Since she was a baby, Aza has suffered from a mysterious lung disease that makes it ever harder for her to breathe, to speak—to live.

So when Aza catches a glimpse of a ship in the sky, her family chalks it up to a cruel side effect of her medication. But Aza doesn’t think this is a hallucination. She can hear someone on the ship calling her name.

Only her best friend, Jason, listens. Jason, who’s always been there. Jason, for whom she might have more-than-friendly feelings. But before Aza can consider that thrilling idea, something goes terribly wrong. Aza is lost to our world—and found, by another. Magonia.

Above the clouds, in a land of trading ships, Aza is not the weak and dying thing she was. In Magonia, she can breathe for the first time. Better, she has immense power—and as she navigates her new life, she discovers that war is coming. Magonia and Earth are on the cusp of a reckoning. And in Aza’s hands lies the fate of the whole of humanity—including the boy who loves her. Where do her loyalties lie?

Why I’m excited: I’m not a big fan of books being sold as similar to another book or author, but Stardust meets The Fault in Our Stars? I’m not going to lie, that intrigues me. I love books with different worlds, with new places and new things to discover. I also love books that infuse fantasy into our reality. This book sounds incredible, and I feel really lucky to have gotten an ARC this past week (oh, the benefits of being nice to people). I can’t wait to dive into it soon. 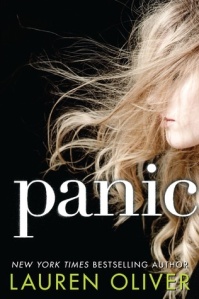 The plot of this book is really intriguing: in a small, boring town named Carp in the middle of nowhere New York, the students give a dollar every day for the whole year into a pot. The pot is the prize for the winner of Panic, a game that the newly graduated seniors can take part and which tests their courage, smarts, and daring through a series of exceedingly ridiculous and sometimes illegal stunts over the course of the summer. Heather wasn’t going to participate, but she does and throughout the game, her friendships are tested, alliances are made (and broken), and her life is put on the line. Interesting, right?

Well, it was a little underwhelming for me. I’m really glad I listened to this as an audiobook because Sarah Drew’s narration made this book for me. Her cadences and emphasis and ability to race through words to give the listener a sense of the overwhelming panic Heather feels throughout the tasks was amazing. There are lots of feels in this book too. Heather’s family problems with her mother and the relationship between her and her friends goes through a rollercoaster of emotions and changes, and this is definitely a part that Oliver did a seriously good job with.

On the other hand, several parts of this story are unrealistic. To illustrate, I’m going to quote my friend over at Booknerderie’s review of Panic:

The game itself. On what planet do teens participate in a game that consists of breaking and entering, arson, russian roulette and tigers. Not this planet.

In addition to being somewhat unrealistic, it is also seriously predictable at times. I called the end by about halfway through, which is disappointing.

Sixteen-year-old physics nerd Aysel is obsessed with plotting her own death. With a mother who can barely look at her without wincing, classmates who whisper behind her back, and a father whose violent crime rocked her small town, Aysel is ready to turn her potential energy into nothingness.

There’s only one problem: she’s not sure she has the courage to do it alone. But once she discovers a website with a section called Suicide Partners, Aysel’s convinced she’s found her solution: a teen boy with the username FrozenRobot (aka Roman) who’s haunted by a family tragedy is looking for a partner.

Even though Aysel and Roman have nothing in common, they slowly start to fill in each other’s broken lives. But as their suicide pact becomes more concrete, Aysel begins to question whether she really wants to go through with it. Ultimately, she must choose between wanting to die or trying to convince Roman to live so they can discover the potential of their energy together. Except that Roman may not be so easy to convince.

Why I’m excited: First, that title. Second, nerds. Third, that summary. Wow. That sounds incredible. She must convince him “to live so they can discover the potential of their energy together” – how awesome does that sound? Yep. I want to read this. RIGHT NOW, please and thank you.

What are you excited about?