I was tagged by Lizzy at My Little Book Blog to do the Emoji Book Tag. I don’t have an iPhone which means I don’t really have emojis, but I’m going to use some of my favorites and a few that I use on Twitter. Basically, you’re supposed to go through your phone and figure out your 5 most frequently used emojis and then match up a book to the emoji. 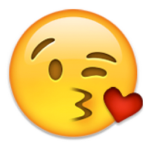 I use this emoji on Twitter a bunch when I’m talking to bloggers or authors, but for me A Court of Thorns and Roses by Sarah J. Maas is the most recent representation of this book because you just want ALL THE MAKE OUT SCENES.

I use the heart eyes emoji A LOT because I read a bunch of books that I just adore. The heart eyes emoji is just perfect when you fall in love with the characters in a book, like I did when I read Simon Vs. the Homo Sapiens Agenda by Becky Albertalli. Simon and Blue are just so freaking adorable and I had heart eyes the whole time I was reading the book.

I just finished Aristotle and Dante Discover the Secrets to the Universe by Benjamin Alire Sáenz, and while I ended up liking it okay, I was just not over the moon with it. I think I was partly a victim of the hype monsters but I also didn’t connect with it as much as I was hoping. I had the unamused face during all the part that the book dragged.

This one is technically called the “Face Screaming in Fear Emoji” but I’m taking it to mean “Holy crap, I did NOT see that coming emoji”. The book that perfectly sums up that emoji for me is Made You Up by Francesca Zappia. I was totally shocked by the development near the end of the book, and even though I knew something was going to happen, I didn’t know it was going to be THAT.

I’m a wanderer, a traveler. I have a need to travel, and I feel restless when I don’t, so I feel like I’d use the airplane emoji a lot when I’m feeling the need to plan my next trip. The Statistical Probability of Love at First Sight by Jennifer E. Smith perfectly matches to this emoji as the two main characters meet in an airport and then wind up next to each other on a flight across the ocean.