I finished this one more than two weeks ago, but I’ve been struggling to write the review, for several reasons. I think my expectations were a little too high (both because that cover is freaking gorgeous and the synopsis sounded awesome) and the book didn’t quite live up to those expectations. I absolutely love the concept behind the book, but I’m not sure about the execution of the ideas.

Let’s start at the beginning: Marguerite’s father is dead, murdered by a man he trusted, Paul – one of his assistants. Theo, his other assistant, and Meg follow Paul into the dimension in which he’s escaped, by using two Firebirds, which gives them the ability to jump between dimensions. This is how it starts – we are thrown into the story without giving us much time to adjust or connect with any of the characters. It feels like we are trying to catch up with the characters, relationships, and story. My emotional investment, therefore, suffered.

Something I really liked: In a lot of sci-fi, when you jump into a parallel universe, there are usually two of you. In A Thousand Pieces of You, you jump from your body into the “you” in that dimension. I thought this was a unique and really interesting way to do things, though it does create the problem of Marguerite’s horrible decision on behalf of her other self in the Russia-inspired dimension.

I also thought the world building was pretty great. The parallel universes were interesting and I liked that they could be almost exactly the same except for one small change. I thought Russia was well done – at least in showing how the aristocracy lived. I would love to see some other dimensions that were wildly different from our own, though I expect (or hope, at least) that this will happen in subsequent books. Yes, even though I had issues with this first one, I am interested enough to want to read more. Another thing I’d like to see more of in the next book is how the Firebird actually works. In A Thousand Pieces of You, little to no explanation is given. As Marguerite has never taken much interest in the technical side, she would start to delve into the mechanics and then brush it off by saying it’s a lot of technical mumbo-jumbo she didn’t understand. It was kind of like a cop out. I wanted to know how they were dimension-jumping!

There was some pretty writing though! You know I have to share a quote or two. 🙂

Now I know grief is a whetstone. It sharpens all your love, all your happiest memories, into blades that tear you apart from within. – Page 143

The bottom line: As much as I wanted to love this one, it had its problems for me. The focus on the wishy-washy nature of Marguerite’s love for Paul (…or was it Theo? Paul?) was irritating – though I will say the love in the end was pretty swoon-y. I liked the other dimensions but wished we’d learned more about the mechanics of how the Firebird worked. Will still read the next book.

A Thousand Pieces of You by Claudia Gray. I’ll be starting this one today so I don’t have too much to say about it yet. I’ve heard mixed things but several people I trust have said they loved it. I’m looking forward to starting it.

I finished Michel Faber’s The Book of Strange New Things yesterday. It wasn’t at all what I expected, but I really, really enjoyed it. More literary than I usually read, but it was refreshing and a nice change from my norm. I’ll be reviewing it next week.

I haven’t decided yet. I’ve just started my current read, so I don’t know what I’ll feel like after, but I have a big stack of new comics that I’ll probably dive into after my current book. I’ve got the latest issues of Gotham Academy, Memetic, Thor, Superior Iron Man, Batman and Robin, Fiction Squad, Arkham Manor, and a few others I can’t think of right now. So I’ll be reading all of those next.

What are you reading?

My current read is A Thousand Pieces of You. I opened it to a random page – 104 – and this is the quote I want to tease you with.

Red security lights begin to pulse. The grids cast strange shadows that seem to carve lines around and through us. Soon the metro police will be here. Shit.

I haven’t started this one yet (I just finished my last read this morning), but I’ve been looking forward to it for a while. I’ve heard good things. Seems like it’s going to be full of action, at least that’s what I get from this teaser. Looking forward to jumping in. 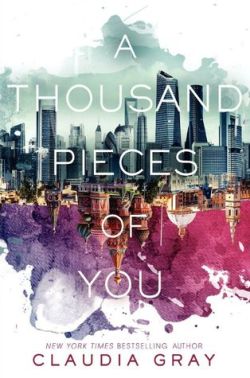 Marguerite Caine’s physicist parents are known for their radical scientific achievements. Their most astonishing invention: the Firebird, which allows users to jump into parallel universes, some vastly altered from our own. But when Marguerite’s father is murdered, the killer—her parent’s handsome and enigmatic assistant Paul—escapes into another dimension before the law can touch him.

Marguerite can’t let the man who destroyed her family go free, and she races after Paul through different universes, where their lives entangle in increasingly familiar ways. With each encounter she begins to question Paul’s guilt—and her own heart. Soon she discovers the truth behind her father’s death is more sinister than she ever could have imagined.

A Thousand Pieces of You explores a reality where we witness the countless other lives we might lead in an amazingly intricate multiverse, and ask whether, amid infinite possibilities, one love can endure.

I wanted to try to only use books for Waiting on Wednesday that were coming out in the next month or two, but I am really looking forward to this book. I found out about it a couple of weeks ago. It was on several people’s Top Ten Tuesdays for the theme: book cover trends. It is an absolutely gorgeous cover, in my opinion. So I looked it up on Goodreads and read that very intriguing descriptions. It sounds SO good. I love a good sci-fi, and this one sounds really unique. I’m definitely looking forward to read A Thousand Pieces of You.