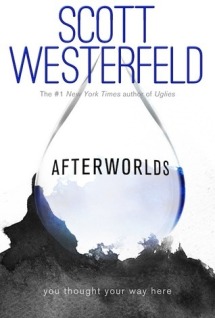 This book is LONG. Yes, it’s 599 pages, which is a somewhat long page length, but I read long books all the time. It was just long. It took me almost two weeks to read which is a long time for me. How many times do you think I can say long in the first paragraph? I think part of the problem was that it took me a while to get into it. Once I did, I suppose it didn’t take too much time to finish. As this book is told in alternating chapters of Darcy’s real life (which reads much like a contemporary novel) and Darcy’s novel about Lizzie (which is very much fantasy), I think I should break up my review into two sections: Darcy and Lizzie.

Darcy’s story was my favorite of the two. She’s written and sold a book she wrote during NaNoWriMo and has high tailed to NYC with her outrageous earnings to live for as long as she can there while rewriting her novel Afterworlds. She’s just graduated high school so is somewhat naïve and a bit of a newbie, but as she lives in NYC, meets authors, falls in love, gets her heartbroken, and rewrites, she grows up. I really enjoyed her character growth and seeing this side of the publishing industry in a book. I have a Master’s degree in Publishing Studies so I’m really interested in this, and I don’t think most people get to see what this side of the books you read looks like. I don’t know too much about the writing side so seeing Darcy’s book evolve throughout was really cool.

I especially enjoyed being able to see things that Darcy and Imogen (another writer) would discuss that would then show up in Darcy’s novel. Seeing Darcy change the novel from conversations she has gave an insight into how writing works, which I liked. I also really liked the romance between Darcy and Imogen, and even though they got together really quickly, I don’t think it felt like instalove. It felt genuine and organic.

Lizzie is the main character in Darcy’s novel Afterworlds, who after surviving a terrorist attack at an airport, finds out that she can now enter the afterworld (or the flipside as she eventually comes to call it), a place that is just like our world but gray and which renders her invisible to the living. When she first entered the afterworld, she was greeted by a boy named Yamaraj, a psychopomp or a guide to the dead. After returning home from the attack, she meets Mindy, her mother’s best friend from childhood who is eleven years old and dead. She was abducted, murdered, and buried in her own backyard, and Lizzie promises to seek revenge as she comes to care for Mindy. I really liked Mindy’s character and how she was both still a child and a little bit grown up. She was still deathly (hehe) afraid of the bad man who’d murdered her and hid in the closet where she felt safe. I won’t give anything away, but what happened later in the novel in regards to her character was fascinating. Very cool idea.

Unlike with Darcy, I really hated the romance in Lizzie’s chapters. It was exactly like instalove and even though it’s explained that Yamaraj hasn’t really aged and is still very much like a teenager, any kind of romance between someone who is really thousands of years old and someone who is actually 17 is creepy (*cough*Twilight*cough*). They jump into a relationship way too quickly, especially after Lizzie has come through something so horrible. On that note, I think Lizzie’s reaction to everything happening to her is…well, it’s pretty much nonexistent. She doesn’t really react to almost dying or to the fact that she can see ghosts or that she can now visit the land of the dead. It was weird.

I did really enjoy the whole idea and plot and story behind Afterworlds though. The thing that gets me though is the fact that it reads like a debut novel even though it was written by Scott Westerfeld. This is either an account of how awesome a writer he is or is not really a good book (Darcy’s novel, I mean). I can’t tell so I’m not sure how I feel about it.

The bottom line: I really, really enjoyed the chapters that centered on Darcy and her road to publication. I liked the idea behind the chapters from her novel but had my reservations when it came to Lizzie’s romance and her reaction to what happened. Overall, it was good but not great. I liked it but didn’t love it.

Rating: 6.5 – between good but not great and pretty good

Seize the Tuesday is a book blogger meme created by myself and the Let’s Get Lost Buddies Street Team, to share stories about how we’ve seized the Tuesday, with a special focus on the particular book we’re reading. We’ll share our posts online with the hashtag: #LetsAllGetLost. The idea is to share little ways in which you may have embraced Bree’s motto of seizing the Tuesday. To relate it to books, you can talk about what book you’re reading, and how you stole some moments from the day to enjoy reading. It doesn’t have to be about reading, but we all know that a well-read day is a day seized. The idea is not just to help spread the word on LGL, but also to remind people to live fully, even/especially if that means spending a part of your day reading.

I was off from work today so I set my alarm for 8. Yeah, I don’t really know what sleeping in means. Which can be further demonstrated by the fact that my body woke me up at about 6:20 a.m. and would  not let me go back to sleep. So I got up, poured myself a cup of coffee, and sat on the couch in the lovely quiet of the morning and read.

I’m still working on Afterworlds by Scott Westerfeld which is taking me quite a bit longer than I’d originally planned. I suppose it makes sense: it is 599 pages. If you aren’t familiar with the book, let me give you a short run down: Darcy has written a novel that is being published. Alternating chapters detail her journey to publication and chapters from her novel. I’m enjoying it but I’m having my reservations when it comes to the love interest in the chapters from Darcy’s novel.

By the way, Let’s Get Lost featured in my Top Ten Tuesday today too!

I’m currently reading Afterworlds by Scott Westerfeld. It’s pretty great so far. I haven’t gotten that far into it yet as I’ve been a little busy (or relaxing with arts and crafts like yesterday), but I hope to read more of it today. I really like the alternating chapters between real life and Darcy’s fantasy world in her novel. So cool.

I finished reading Marie Lu’s The Young Elites a few days ago and reviewed it on Monday. I thought it was absolutely incredible. I was super impressed by my first Lu book. Her world building was amazing and I cannot wait for the next book. The Young Elites is one of my favorite books I’ve read this year. I gave it a 9.5, which should tell you how much I loved it.

I’m not sure. I had this awesome haul last week, and I’m not sure what I want to read next from it. What do you guys think? Want to recommend something to me? Let me know in the comments! 🙂 Here are the titles I want to choose from: My True Love Gave to Me, Black Ice, Belzhar, or Messenger of Fear.

My current read is Afterworlds by Scott Westerfeld. I opened it to a random page – 283 – and this is the quote I want to tease you with from that page.

The whistle of the bad man’s breath sputtered for a moment, and a tremor passed through the gray bedclothes. I froze, staring at them, my heart pounding sideways in my chest. Even invisible, I felt as though any movement would wake him. I was afraid to breath.

Their bodies fit perfectly like this, two continents pulled apart eons ago but now rejoined.

I know that last one isn’t very long, but I like that sentence all by itself. It doesn’t need any context. I’ve only read ten pages of Afterworlds so far, but I really like it. I’m looking forward to getting to these two teasers.

I just started Marie Lu’s The Young Elites last night. I’m only a few chapters in but I am already loving it. Her writing is amazing, and already the world-building is incredible. I hope to have time to read a good chunk of it at work today (oh the perks of working at a library!). I’m so glad it won my little what-to-read-next poll! 🙂

I recently finished (and reviewed) Mary Amato’s Get Happy, which I was quite impressed with – check out my review for more on that. I also read (and reviewed on WatchPlayRead) the first issue of the new Edward Scissorhands comic, which I also quite liked. I read the latest issue of The Walking Dead (always good), Batman and Robin (freaking awesome), and a few others. I’ve had a good few days of reading.

I think I’ll probably read Scott Westerfeld’s Afterworlds. It was the other book in my what-to-read-next poll and it lost, but after I finish The Young Elites, I’ll probably check that one out. I’m looking forward to that one as well. I’ve heard some mixed things about it, but I haven’t ever really had a problem with Scott Westerfeld, so I’m sure I’ll like it.

What about you? Link  me up to your WWW Wednesday post or tell me your answers in the comments!

Alright, I need your help. I finished Get Happy by Mary Amato last night (reviewed it this morning), and I don’t know what to read next.

I recently bought Scott Westerfeld’s new book Afterworlds and checked out Marie Lu’s new book The Young Elites from the library. Those are the two books I’m currently debating between, and I want YOU guys to help me pick. Please? Just tell me which you’d rather see me review or which you’ve read and think I’ll enjoy or just click one of the buttons. 🙂

Check out the books on Goodreads if you want to know more about them (the covers are linked to the corresponding Goodreads pages). 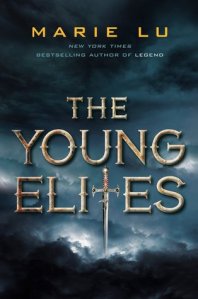