Hi, guys! Today I’m super excited to be hosting Sheila Agnew, author of Evie Brooks is Marooned in Manhattan for an interview and guest post as part of the Evie Brooks Blog Tour. Check out my interview with Sheila and her guest post about her love of travel and then enter to win a hardback copy of the book (US only – sorry!!). But first: 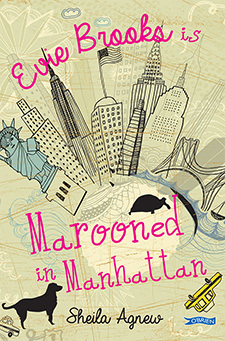 After Evie Brooks’ mother dies, her American uncle Scott, whom Evie barely remembers, arrives in Dublin. Much to Evie’s dismay, she’ll have to go and live with Scott in New York City.

Having never owned a pet more substantial than a goldfish, Evie is intrigued by her uncle’s NYC veterinary practice. Scott engages Evie as an assistant in the clinic. Thus begins a series of light-hearted adventures with lovable animals and their sometimes lovable owners.

At the end of the summer, Evie has to make the choice of whether or not to return to live in Ireland with her godmother, Janet…

Describe your book (or the series) in 3 words.
Funny. Serious. Compassionate.

What is the best memory from your journey to becoming an author?During a school visit a boy told me that he wanted to be a writer but that his teacher said that he wasn’t good at English. I told him how Roald Dahl’s teacher said that his writing efforts reminded him of “a camel.” The boy asked, “Did the camel have one hump or two?” I thought that was hilarious and I think that he definitely has the imagination to be a writer!

Can you tell us a bit about your writing process?
I get an idea for one scene and I just run with it. I don’t normally outline except I had to do an outline for the second Evie book under my contract. So I sat down one Sunday and wrote an outline of about twenty pages detailing every chapter. The publishers were basically like, umm, thanks but we didn’t need anything like this much detail. I never looked at the outline again. I should pull it up someday and see if the book as written actually resembled the outline.

As I know you’ve traveled extensively, what’s your favorite place in the world?
Ireland. It took Dorothy a whole book to realize that there’s no place like home.

Have you ever worked in a veterinary clinic? What made you choose that as Uncle Scott’s profession?
No. But I’ve done a lot of volunteer work with animals especially horses. I just love the presence and smell and feel of horses. It gives me that “all’s well with the world” feeling. And I got my dog, Ben, ten years ago. I just threw him straight into the Evie books exactly as he is. He’s the only non-fictional character.  I knew straight away that Scott had to be a vet because I wanted the animals to help Evie deal with the loss of her mother. Animals have so much to teach us. And there’s a lot of scope for humor!

Who’s your favorite fictional character?
That’s a really tough one. When I was a child, I loved the book, “I am David” by Anne Holm. It is about a twelve-year-old boy who escapes from a concentration camp and travels through Europe looking for his mother. I still think that David is one of the most beautiful souls ever written. But I think I’d prefer to have dinner with Oscar Wilde’s characters.

As a seven-year-old, I was already a highly experienced traveller because I’d gone all the way to Narnia and back six times. C.S. Lewis’s chronicles of Narnia will always remain irreplaceable in my affections. One of the great joys of reading is the ability to travel not just everywhere in this world, but to other worlds as well. I think that readers are born travellers (and time travellers too.)

My writing has been greatly influenced by my travel experiences. Sometimes I’ve found a detail or a character for a story, and other times, the story itself. My books were conceived in far-flung lands . . . and much closer to home. About five years ago, I went to live in an isolated cabin in the woods in Connecticut for a couple of months. One afternoon while I was reading out on the deck, my dog, who had been sleeping inside, flung himself through a hole in the mosquito screen, barking so furiously at something behind me that white foam dripped from his mouth. I turned around. A few feet away stood an enormous black bear. I will never forget my prehistoric, cave girl fear in that moment; a deep primal fear of being eaten alive.

I have no idea how long I stood there, staring at the bear staring at me. At some point, I got it together, grabbed my dog, rushed us both inside and locked the door. Then I remembered that the other door to the cabin was open. I ran around like a lunatic and locked that door as well. Through the window, I watched the bear, now on all fours, circling the cabin. I grabbed my iPad, and googled, “Bear outside cabin, what should I do???”

Google told me to call my local police station. I reached a rather apathetic member of the force called Mary.

“There’s nothing we can do,” she said.

“There must be something you can do,” I wailed. “I can’t stay here for the rest of my life waiting for the bear to look elsewhere for a snack.”

“Oh,” she said in an interested tone, “is the bear attacking you right now because if he is, I can send a patrol car.”

Was Mary insane or was she being sarcastic? I wondered. I still don’t know. What I do know is that I made the episode a chapter in the second Evie book, Evie Brooks in Central Park Showdown. I barely had to change a thing.

One of my favorite places in the world is Argentina. From the second I arrived at the airport in Buenos Aries in 2011, I felt a strong sense of being at home. It’s funny how we often travel to try to find a place that feels like home. I spent almost as much time in Chile as I did in Argentina. And yet, while I appreciated Chile and its people very much, it wasn’t the same feeling. Even if I lived in Chile for a thousand years, we would never be in love. Whereas, for me and Buenos Aires, I guess it was love at first landing.

I’m very grateful for my experiences in South and Central America and in The Dominican Republic. Without those, I doubt if I would have had the confidence to write my YA thriller, The Exclusion Wars, which is narrated by Mateo, a fourteen-year-old Latino in hiding in New York in the year 2025. 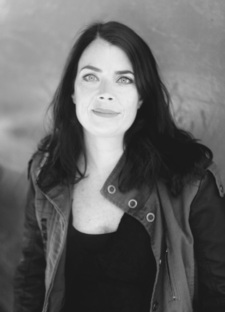 Travel hasn’t always lived up to my expectations. Between college and law school, I spent a few months working in Grand Cayman. I had responded to an advert for a job in “the British West Indies.” I thought that sounded so exotic and glamorous and mysterious. To my disappointment, Grand Cayman was none of those things. But I did have fun and enjoyed making new friends.

I think that we have to try and take as many travel chances as we can. Sometimes that means reading in a genre outside our comfort zones, a new potential world to explore. Maybe we will fall in love, maybe not. But it’s nearly always very interesting!

Thanks very much for having me on your blog.  Please visit me on the Web any time. http://sheila-agnew.com

Click on the link below to be taken to Rafflecopter and enter the giveaway. It will run from December 9 – December 22 at midnight. US only. One winner will receive a copy of Evie Brooks is Marooned in Manhattan by Sheila Agnew. 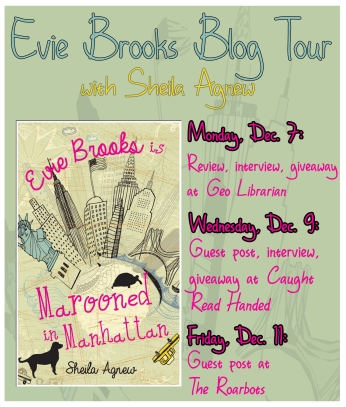 Check out the other stops on the tour:
Review, interview, and giveaway at Geo Librarian
Guest post at The Roarbots