Today I’m excited to be hosting Russell Scott, author of THE HARD TIMES and local Mississippi resident, on the blog for an interview and a giveaway! Check out the interview and let Russell tell you a little more about himself, his book, and his road to publication. After you read the interview, be sure to enter the GIVEAWAY (yay giveaway!) to win a copy of THE HARD TIMES. Also, don’t forget to check out the book on Goodreads and see what it’s all about!

Describe yourself in 6 words. Physician, husband, father, scientist, writer, artist. In that order.

Describe your book in 6 words. Fundamental truths on love and life.

Tell us about your day job. Does it influence your writing or writing process? Of course it does being a radiation oncologist means that I spend my days with patients facing one of the most challenging metamorphosis in life, dealing with one’s own mortality.  The facing of death is a solemn business, so we try to laugh as much as possible, a big part of my job is to share the doubts and still see the beauty in life.

How did your own personal experiences inspire The Hard Times?  The book is basically a bunch of things that happened in my life, distorted and reframed, and hung on the scaffolding on a diamond smuggling scheme in Namibia.  I’ve hunted in Namibia and deployed in Africa when I was in the Navy, so those things are very directly related.

Can you tell us about your road to publication?  Well, it started out with screen writing, I wrote Time Donors as a screenplay ten years ago, we got offered four million dollars to make it into a movie, but first we had to make a smaller movie to prove we could do it, so we wrote and filmed the feature film “Teary Sockets”.  While we were filming that I got hired by the Williams Brothers to write the screenplay story of their family’s life, “Still Standing Tall”, for a project that they were talking to Tyler Perry about, so they needed it yesterday.  We finished filming “Teary Sockets” and I went straight to work on “Still Standing Tall”.  By the time I got done with those two projects the banking crisis had sit and the hedge fund that originally had offered to back us was gone, so I converted “Time Donors” to the book “Time Donors Wanted”.  I thought e books were the future of book sales so I started an e book publishing entity IsoLibris, and put out “Time Donors Wanted”.  My friend Luke Lampton, who owned Magnolia Gazette Publishing which had been in continuous operation since 1872 thought we should do a literary press and start a literary journal as a new united Press China Grove Press, so we did, we’ve done 4 issues of the journal China Grove as editors, with very good success, and continued to publish books, one of which was a collection of the columns I had written for 5-6 years in the JOURNAL of the Mississippi State Medical Association, we named it for the column and that was “The Uncommon Thread” by R. Scott Anderson MD.  This book The Hard Times was actually written five years ago, it just took until now to feel that I had the time to put it out and to get it into proper shape to be a good book. So here it is by China Grove Press.

Not only do you bring in your real life military experiences into the novel, but you also bring in other elements from the diamond trade. Tell us about that – your research process, the different elements you bring in, etc. – The factual research was just grinding away, the whole firs inkling of a plot came from a National Geographic article on Artisanal Diamond Mining in Zimbabwe that led to digging into the elements of the Kimberly Process, it’s enforcement, and declassified CIA intelligence reports about the times I was interested in.  Then you get a needle and sew all that together into a novel.

Has living in Mississippi influenced your writing in any way?  Only in that it puts a lot of pressure on you to write well, we don’t tolerate crappy writers in Mississippi.

Which writers inspire you? I was a Faulkner fanatic when I was at Alabama, we had a crazy professor there then named Barry Hannah, he was a writer to know.  I fell in love with Ellen Gilchrist and her writing when I read her first book, “In the Land of Dreamy Dreams”.  I’ve interviewed her, and Winston Groom, the author of Forrest Gump.  Spent some time with Greg Iles talking about writing, have had several conversations with Pat Conroy, Tess Gerritsen, and Michael Palmer, they’ve all given me something that is a part of the way I write.

What’s been your best experience as an author so far?  Developing in this community of writers that I have been privileged to meet and know, that’s really why we bother to do China Grove, the literary journal in the first place to create a community of writing where every level is welcome, from legends to newcomers.

I ask this of everyone – what’s your favorite book?  I guess I have to say, A Confederacy of Dunces by John Kennedy Toole, I love the book and find the circumstances of it’s publication touching. Toole’s suicide, his mother’s dedication, and Walker Percy taking on the role of editor and champion…all in all, a tale in itself.

Anything else you’d like to tell us about you or your book?  This book is just a good story about diamond smuggling on the surface, but it is also an offering of an insight into the way men love, and some of the fundamental truths in life as told by an author that works in the face of death every day…the last line may be the most basic truth of life you ever read.

Thanks for letting me jabber on, Scott 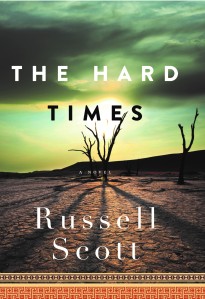 The Hard Times is, first and foremost, a novel about how men love. It focuses not on simple lust nor affection, but the complex web of expectations, loyalty, duty, and desire that define the society of men, how they love women, how they love their families, and how they bind themselves to one another in friendship and in war.

Taken from the news, declassified CIA documents, and the author’s personal experiences in Africa and Namibia, it is a fictional story superimposed on what’s actually happening in the diamond trade, today, where international politics and industry, play a strange game of hide and seek with illegal stones.

It begins in Mississippi. Ray Moffett is an ER doc, and Ray is facing an abyss. When his best friend and former boss comes into the ER dead, just six weeks after his retirement party, Ray finds himself searching for meaning in his own life. All Ray has left is his work.  Work, punctuated only by the occasional round of golf.  That’s all he can see stretching between him and his own trip to the grave if something doesn’t change.

A chance meeting with an African hunting guide, Fritz Dietrich, shows Ray a second chance to live the adventures he’d dreamed of as a boy.  Dreams that were fueled by books written by men like Hemmingway, Ruark, and Capstick. Unfortunately, Fritz isn’t exactly what he seems.

Ray finds himself hunting desert oryx in the Namib with Fritz, both men trapped. Fritz must kill Ray and use his papers to smuggle illegal diamonds.  For Ray to get home alive, he’s going to have to kill Fritz and then, somehow find his way out of the most hostile desert on the face of the earth.

Add the book to your Goodreads shelf! 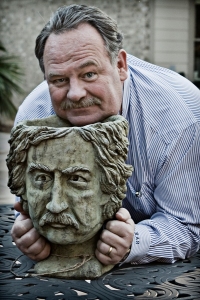 RUSSELL SCOTT ANDERSON, M.D. is a radiation oncologist who serves as the medical director of Anderson Cancer Center in Meridian, Miss. He is a former Navy diver who worked in operations in the Middle East, Central America, and in support of the Navy’s EOD community, SEALS, the U.S. Army’s Green Berets, the Secret Service, and the New York Police Department at various times during his time in the service.

The father of seven has written the family oriented literary columns Una Voce and The Uncommon Thread in the Journal of the Mississippi State Medical Association. He has also served the Journal as the chairman of the editorial advisory board. A collection of his columns was published as The Uncommon Thread in 2012. He has also written as screenwriter R.S. Anderson on several feature films, he is the author of the novels Timedonors Wanted and The Hard Times under the pseudonym Russell Scott, and is the editor of the literary journal China Grove.

Click on the photo below to be taken to Rafflecopter and enter the giveaway. It will run from November 5 – December 4 at midnight. US only. One winner will receive a copy of The Hard Times by Russell Scott.