I recently came across Smartling, a company that has a really cool cloud-based translation software program, and started thinking about books in translation and the importance of certain aspects of language while translating. This is a fascinating subject for me as I have always been interested in culture and how certain things are easily interpreted (or not) between 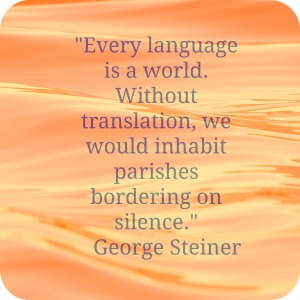 cultures and languages. I started thinking about my favorite books and the parts of them that I would hate to be misinterpreted if they were translated into another language. There are even times when I’m reading a book in English that’s from the UK and there are certain aspects that don’t easily translate (words used in the UK that don’t make sense here or cultural norms – school, living, etc. – that are different. For me, I usually know what they mean, but I always imagine someone who’s never been to the UK and if they’d get it. Like how “pants” are what they call “underwear” in the UK). It’s hard to imagine a book about a girl in high school in America obsessed with her looks or any number of selfish things translating into a language in a country where girls aren’t allowed to flaunt their looks.

On the other hand, there are some books that would easily translate into multiple languages (maybe. I’m not a translator. Haha). Comics like Batman and Robin or Iron Man are probably able to be understood in several languages because who doesn’t want to believe in superheroes? Again, not a translator, but I think fantasy books are probably the easiest to translate because they are mostly (if not completely) based in other worlds and most of the elements are made up. I feel like contemporary, real-life books would be the hardest to translate because there are so many things that are culturally important or relevant that wouldn’t make sense in other countries or languages. How do you explain Groundhog Day or Presidential Turkey Pardons or Tailgating to people who have never heard of Thanksgiving or have never seen an American Football game?

Maybe this won’t make sense with what I’ve said so far, but personally, I think this is why books in translation are so important. I LOVE to travel and learn about the world and the people who live in it. Reading books in translation allows me to better understand the world. No, I’m not able to read it in its original language, but that doesn’t mean I don’t get something out of it or learn something new about other countries and people. I tend to read a lot of crime novels in translation (for example, Jo Nesbø) but I’ve also read incredible books by Gabriel Garcí­a Márquez, Niccolò Ammaniti, Albert Camus, and so many more. I mean, who hasn’t read The Little Prince? Whose life wasn’t touched by that one?

Imagine how small our world would become without books in translation. Reading books originally written in another language and set in another country allows me to learn more about the amazing, fascinating, strange, beautiful world we live in.

What do you think about books in translation? Have you read any? Did they make sense or were there confusing moments?

After writing this, I actually really wish I spoke/read another language well enough to see if all of my favorite parts of my favorite books translated well. Hmmmm.

By the way, make sure you go check out Smartling’s software – they translate websites, apps, and documents for businesses in a quickly and efficiently using REAL people and not the one-size-fits-all translation of some other sites. Check out their website to learn more!