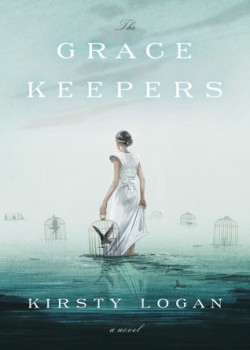 Do you ever read a book that is just so beautiful you almost can’t describe it? That’s The Gracekeepers for me. I’ve been wanting to read this book for months, and I wasn’t disappointed in the slightest by it. How to put it into words though? Okay… Look at that cover. See how it’s both intriguing and a little strange? Calm and peaceful but somewhat disturbing? That’s this book. This book is all of those things and so much more.

I was sucked into this world of damplings (those who live on the sea) and landlockers (those who live on land) as soon as I started reading. Sometime in the future most of the land has vanished and a vast majority of people now live on water, travelling from island to island to trade or in the case of North, the main character, to perform as part of a travelling circus. The politics and dynamics of this world were fascinating and through North, the bear-girl, and Callanish, the gracekeeper, this world was brought to vivid life. Gracekeepers are those that perform a Resting ritual to lay damplings who have past to rest in the ocean. I can’t even begin to describe how beautiful and haunting the descriptions of those Restings were.

I just loved this story. Kirsty’s prose is gorgeous and lyrical and I could barely put the book down because I was so enchanted by it. Her world building is fantastic. I had a few hiccups with understanding what had happened to the world as there’s no real explanation for why the world is mostly water. Also, you guys might know how much I love Scotland, and The Gracekeepers weaves in some Scottish folklore and mythology which I adored.

All of the characters were so well done that even the ones I hated, I loved. I thought it was smart that the POVs rotated throughout the book; we didn’t just get North and Callanish’s POV, but also the clowns, the ringmaster, an acrobat, and several others. None of them felt like I was reading the same character. Each was distinct and well-done (my favorite might’ve been the clowns for their description of the ringmaster’s wife as a “horse-bitch”). My only complaint here is that I wanted more time with each of the characters, especially Callanish, to learn more about them.

The bottom line: The Gracekeepers is a magical book. It will enchant you from its first page. It felt like a fairy tale of sorts, and I would highly recommend it.

7 thoughts on “ARC Review: The Gracekeepers by Kirsty Logan”