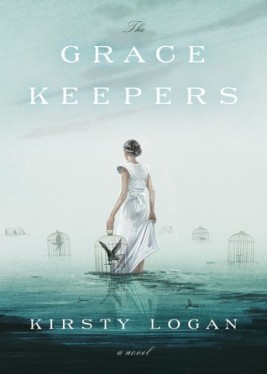 A lyrical and moving debut in the tradition of Angela Carter and Margaret Atwood, introducing an original and commanding new voice in fiction.

As a Gracekeeper, Callanish administers shoreside burials, laying the dead to their final resting place deep in the depths of the ocean. Alone on her island, she has exiled herself to a life of tending watery graves as penance for a long-ago mistake that still haunts her. Meanwhile, North works as a circus performer with the Excalibur, a floating troupe of acrobats, clowns, dancers, and trainers who sail from one archipelago to the next, entertaining in exchange for sustenance.

In a world divided between those inhabiting the mainland (“landlockers”) and those who float on the sea (“damplings”), loneliness has become a way of life for North and Callanish, until a sudden storm offshore brings change to both their lives–offering them a new understanding of the world they live in and the consequences of the past, while restoring hope in an unexpected future.

Inspired in part by Scottish myths and fairytales, The Gracekeepers tells a modern story of an irreparably changed world: one that harbors the same isolation and sadness, but also joys and marvels of our own age.

Why I’m excited: I know Kirsty, but that’s not why I’m excited. “Inspired in part by Scottish myths and fairytales” – you guys know how much I love Scotland. A circus. A name like Callanish. Loneliness, isolation, joy, and hope. I can’t even tell you how much I want to read this one. It sounds really wonderful, and I am definitely looking forward to reading The Gracekeepers. Plus, look at that beautiful cover. Can I just have it now, please and thank you?

4 thoughts on “Waiting on Wednesday: The Gracekeepers by Kirsty Logan”