After reading/listening to The Dead Fathers Club, which ruined all audiobooks for me, Wonder was the second one I could get through. It was a rough start, but I ended up really enjoying it. 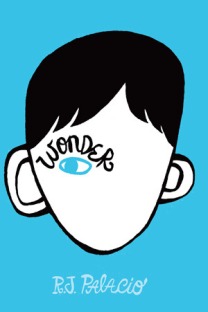 The Wonder audiobook is narrated by three different people. The person who narrated the main character, Auggie Pullman, is a woman, and it is pretty obvious that she is not a young boy but rather a woman attempting to sound like a young boy. At first, I found it really difficult to get used to her voice because she purposely has a slight lisp and a scratchy voice. Honestly, I didn’t think I would be able to force myself to listen to the entire thing for eight hours, but I was drawn in by the story and I couldn’t stop listening. Eventually, I got used to her voice – I think it probably helped that it changed between the narrators and points of view about every disc and a half so I didn’t get too irritated. By the end of the audiobook, however, I found myself actually enjoying her voice; not sure how that happened.

While there are only three narrators, we get a total of six different perspectives throughout the book, and each of their voices was unique to me. Occasionally you could tell that it was the same narrator, but for the most part, their voices were different but not in such a way that it was weird. In between The Dead Fathers Club and Wonder, I tried several different audiobooks but couldn’t get more than one drive to work through them. Several of them had readers that tried too hard to make the voices distinct – a super rough, scratchy voice for an old man, etc.

As for the book, I liked the story a lot. You might have seen my Quote Quoted post where I talked about one of the parts that really hit home for me. I could relate to a lot of this book, and I think the lesson being taught in the book is something that everyone should read. My only issue with this book was the ending. To me, the ending of this book was too perfect. For a novel about a young boy’s struggles with bullying that felt authentic and real, the ending felt wrong. Real life isn’t like that. It isn’t tied up with a cute little bow. Everyone doesn’t just suddenly realize that just because you look different on the outside, you’re super cool and interesting on the inside. It’d be nice if that happened, but it doesn’t. I really loved how Palacio handled everything in the book when it came to how mean people can be, the horrible things they’ll do or say, and how it feels to be the one on the receiving end of all of this crap, but the end disappointed me. Other than that, great book and great audiobook. Definitely recommended.