The lovely Cristina over at Girl in the Pages started Sunday Funday a couple of weeks ago as a way to recap the bookish (and not-so-bookish) things that have happened that week. I thought it’d be a really fun way to keep you guys up to date on what I’ve been reading, reviewing, and wanting to read but also to tell you a little bit more about myself outside of my book love. I think I’ll tailor the post each week to what I’ve done but I will always try to include a book haul and a new book or two that I’ve added to my want-to-read list. 🙂

This week I read and reviewed Coin Heist by Elisa Ludwig, which I wasn’t really a fan of (like, AT ALL), and The Museum of Intangible Things by Wendy Wunder, which made me feel weird. I haven’t started the next book on my list (The Chance You Won’t Return by Annie Cardi) yet because I’m worried I won’t enjoy it. I guess I’m kind of in a little book reading slump, and this makes me sad.

In addition to The Chance You Won’t Return, I’ve got Second Chance Summer by Morgan Matson checked out from the library. I’m looking forward to that since I enjoyed Since You’ve Been Gone so much! I also have e-ARCs of Paradigm by Ceri A. Lowe and The Revealed by Jessica Hickam from Netgalley to read.

Today I found ALL THREE of Jenny Han’s The Summer I Turned Pretty trilogy in one book for $10 at Wal-Mart! I’ve been wanting to check her out for a while, and who could say no to that deal?! I’m excited to start that soon.

I’ve added Across the Universe to my to-read shelf on Goodreads, which I’d like to check out from the library soon. It sounds really interesting!

This weekend I drove up to Memphis (about 3 ½ hours) to see Hands like Houses. They are one of my absolute favorite bands, and this was my third time to see them, but the first time in the States (I saw them previously in Glasgow, Scotland and Manchester, England last year). I got to hang out with them for a few after the show and say hi, and they all remembered meeting me! How cool is that? I also saw Alive Like Me live for the first time; they were one of the openers (along with Miss Fortune and Slaves). I’d only ever heard their first (and only) single, Start Again, and I thought they were freaking fantastic. I ended up buying one of their shirts at the show and then their single when I got home. I met their singer, Jairus, bass player, David, and one of their guitarists, Brandon, and they were very sweet and down to earth. I’m definitely looking forward to their album. Suffice it to say, I had an amazing time!

Here are a few pictures!! 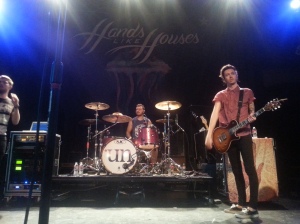 Alex, guitarist, and Matty P, drummer, of Hands like Houses

Alex, guitarist, and Jamal, keyboardist, of Hands like Houses

Some more pictures of ALM.

I LOVE music, so if you have a band/musician that you think I might like, let me know! (No country though, sorry)

TEEN WOLF. Holy freaking crap am I excited. I keep seeing the promo for it and freaking out. Watch it HERE. Season 4 premieres on June 23rd! Any Teen Wolf fans here? Let’s fangirl together!

New tattoos. I have two new tattoo ideas that I am pretty sure I’m getting done this week! One on my foot and one on my wrist. Pictures next Sunday if I get them. 🙂

I also would really like to see X-Men: Days of Future Past sometime this week. Looking forward to that.

What are some of the bookish or non-bookish things that happened to you guys this week? Let me know!